So now three of the top five long distance confirmed kill shots by snipers are three Canadians, one Brit and one US. 4 of the 5 have been named. Two of the five are from Princess Patricia’s Light Infantry, which is quite honestly some of the finest LRRS personnel I’ve ever had the pleasure of working with. There are only three rifles on the top five, the McMillan TAC-50 which holds positions 1, 3, and 4. The 338 Lapua Magnum which takes the #2 spot, and rounding out the #5 spot is the Barrett M82. So that’s 4 fifty cals, and one 338 Lapua, so not too shabby for old John Moses Browning.

For the record, the current once in a career shot by the as yet unnamed Canadian is 3,540 meters. For clarity, that is 2.199 miles distance. https://www.theglobeandmail.com/news/politics/canadian-elite-special-forces-sniper-sets-record-breaking-kill-shot-in-iraq/article35415651/

The rifle, a McMillan TAC-50. https://en.wikipedia.org/wiki/McMillan_Tac-50

The ammo. Well, this is where I get to make an educated guess…. My guess is that it was a 756 gr Armor Piercing Incendiary manufactured by General Dynamic Canada as part of their 12.7mm “Sniper Elite” lineup. http://www.gd-otscanada.com/product/12-7mm-sniper-elite/  although it is possible that a 750gr Hornady Amax bullet could have been used as well.

Calculating the shot for the 750gr Amax at 2815 fps from the muzzle, it looks like 62 mils of drop to get to 3,450 meters. It also looks like even the 750 Amax with a VLD profile went subsonic at 2,400 meters. For the record, I used 31 degrees C, 1005 mb air pressure, and 804 feet above sea level to input the environmental factors to JBM Ballistic to get the solution.

1 mil is 1 meter at 1,000 meters, so 1 mil is 3.5 meters at 3,540 meters. Even using the 26 mils on the scope (assuming an offset base to use all of them) that leaves only 13 more mils from the PMII P4L reticle for a total of 39 mils of drop. So where did the extra 23 mils of drop come from? Well, if we assume that “high rise” that the sniper took the shot from was obviously an elevated position, and to correct for an angled shot you multiply the straight line to target distance by the cosine of the angle to the ground. But for a shot that long, the angle would be very small, therefore the cosine factor would be very small, so that doesn’t get us to the drop necessary with the equipment at hand.

What that means, gentle reader, is that this is quite literally an impossible shot for someone to make on their own. It is clear that our anonymous Canadian sniper wasn’t the real hero of the day, it was his spotter, who talked him on to target. The Sniper wasn’t even looking at the target when he pulled the trigger. He was looking at the top of a building, or some other landmark to aim that rifle high enough to lob that big bullet onto the bad guys.

So, here’s to you anonymous Canadian Special Forces Spotter, you did a helluva job. The world will not remember you because you didn’t pull the trigger, but damn, you made the worlds longest confirmed kill happen. Good on ya.

Edit, there is some confustion about whether this was a 3,450 meter shot or a 3,540 meter shot, a difference of 90 meters. I think that it is possible both numbers are correct. CosX times straight line distance equals calculated distance for the shot. If we assume that 3540 is the straight line distance, and 3450 is the corrected distance, then 3450/3540 = 0.9745762711864407 which puts the angle of the shot at 12.9 degrees, and the shooter at 793 meters (2600 feet) above the target. Given that the shot was taken from a “high rise” this combined with a downhill slope, is in the realm of possibility.

Alternately, the transposition of two numbers could just be a typo. 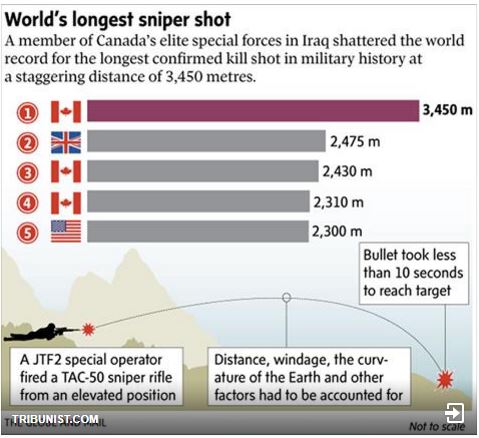 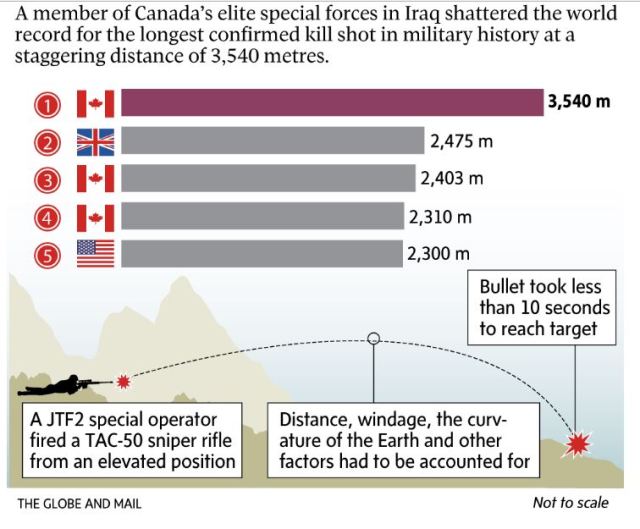 Most likely a typo though.